Deconstructing the thesis that portrays African Women Migrant as ‘Illegals’ or Killers of the Economy in Maputo, Mozambique.

Home • Deconstructing the thesis that portrays African Women Migrant as ‘Illegals’ or Killers of the Economy in Maputo, Mozambique.

This paper is partly the result of the data collected within the MIAG (Migration for Inclusive African Growth) project drop that Professor Giles Mohan leads from the Open University of London and local partners from the university. Further, the MIAG team is formed by a group of researchers from the Centre for Migration Studies, University of Ghana (Ghana), African Migration and Development Policy Centre (AMADPOC, Kenya), Center for Policy Analysis, Eduardo Mondlane University (Mozambique), and Network of Migration Research on Africa (NOMRA, Nigeria). For nearly two years, the research teams collected a bulk of data about immigrants in African countries, where they were asked about their contribution to economic growth. I express my sincere gratitude to all women and men of Africa, China, Portugal, and India interviewed.

Women’s migration has widely been discussed in gender studies. As gender migrant experts said at the beginning women were solely considered as men’s attachés and not real migrants. Then in the context of forced migration, women were engaged in forced labour such as domestic work, entertainment businesses, or nursing (taking care of the children). This exploitative women’s migration challenged Governments to develop protective migration policies either as part of Human Trafficking or part of Immigration law. Lately, literature has demonstrated their contribution in high businesses, academia, health, engineering works, etc.; and are playing an important role in Diaspora remittances. Chikanda and Raimundo (2017[2]) have demonstrated how crucial women’s migration is to Maputo’s informal economy and eventually to the entire country. Raimundo (22021) in a paper that was presented in a conference Royal Geographical Society-IBG Annual International Conference 2021 (31 August – 3 September 2021), held virtually in London argues that women’s migration is so crucial at the point that they created a new Geography of Labour in Mozambique.

The context of Migrant women who are border crossers

In Africa, cross-border trading has been dominated by women for about half a century with the worsening of the economy. From East to West, from West to Southern Africa, women are crossing borders in search of business opportunities so that they can revert remittances to their countries of origin.

In the last three decades, the city of Maputo has witnessed a bold movement of migrants coming from the Great Lakes or elsewhere with a significant presence of women who are coming individually without any male partner and are established in the cities such as dressmakers, craftswomen (women’s bags, multi-coloured school bags, collars, and braiders), cloths sellers and bottle stores managers/accountant and some as primary and secondary school teachers either of English or other subjects. Within this group, we found Burundians, Rwandese, Congolese, Nigerians, Somali, Ethiopians, Zimbabweans, and Malawians. But also, we found a significant number of Philippians, Chinese and Portuguese. There is no difference in country of origin or country of destination. The Portuguese language is no longer a barrier. “Business breaks language, culture and ethnicity barriers”.  Interesting to note is that most of the African women who were interviewed under MIAG (Migration for Inclusive African Growth) project were educated and fled their countries in search of business opportunities as they feel that can compete or complement the work that men are doing.

It is this migration that has shaped the consumption and markets for goods but also created new forms of employment and hence new markets. The influence of these markets goes beyond the borders but also can reach the farthest distances such as Tanzania and Malawi (Raimundo 2021[3]). Women have dominated the market and have demonstrated how warriors they are.

Since this movement of women started has been portrayed derogatively. From one side these women known to be those who are husbandless on the other hand are seen as those who injure the economy of the country because they run away from taxes. The movement of women as cross borders started years ago after the country reached peace after 16 years of a devastating war between 1976 and 1992. However, very few studies have highlighted what women do in other African countries, and the kind of businesses they are involved in.

This paper tries to deconstruct the thesis on migrant women considered as Domestic workers, entertainers, and nurses in Europe and as needle’s businesspersons in Africa, and to distinguish their real role as development agents in Africa through the introduction of new skills and new jobs in hosting community. This will be based on life histories among African immigrants in Maputo City and on an international literature review about women’s migration issues within and outside Africa.

The voices of real economic heroines

“I have extensive experience selling fabric that dressmakers use to tailor Bubus (Long African dress), I am from Nigeria, and I established my business at FAINA (Craft Fair at the City Centre of Maputo). I frequently travel to Tanzania and Uganda to buy good-quality fabric, and I also get it from Nigeria. Chinese have introduced materials (fabric) from China, but the quality is undesirable. I also supply my fabrics to people in Northern Mozambique. Additionally, I sell some lotions and creams for women, and I employ some women in my business centre (Nigerian fabric seller, Maputo, September 19, 2021).

“I am a mobile migrant. I left my country and flew to Guinea-Conacre, where I stayed nine months to find a way to come to Southern Africa. Then I went to Burundi, but the situation there was challenging. While in Guinea and Burundi, I was doing my dressmaker business. But in these countries, this business is not worthwhile as many women do the same. Southern Africa is instrumental as women still learn to dress like West Africans. I realized that here Mozambicans like Western countries dress and I travel to Dubai, Turkey to buy these clothes and I put them in my boutique to sell. I have many orders. I used to travel to South Africa, but with the outbreak of Covid and travel limitations were imposed, I gave up. Currently, my work has crossed internal and international borders (Nigerian dressmaker, Maputo, September 19, 2021).

“I am a Primary school English teacher. I came to Maputo for about five years. I used to teach in Zimbabwe, but the situation worsened, and I decided to go to Maputo. Before Maputo, I spent nearly two years in Chimoio, trying to get a teaching job. But the salary was too low. I tried to compliment my salary with some vending, but it did not work. Then I was called by a fellow of mine to come to Maputo. I got a fair well-paid job as a teacher in one of these international schools in Maputo. (Zimbabwean teacher, October 21, 2020).

Regardless of the reason that brought them to Maputo, African women are engaged in several businesses. They turned into a vibrant economy of businesswomen that travels shorter into the longer distance in search of places to sell their crafts, fashion cloth, and teach English. Despite limited statistics on informal economy and the roles women play in this sector, migrant women remain key to growth and unity of African economies. Migrant businesswomen through their trading have helped in reducing the traditional demand travel through Europe, China, and America for certain goods. They create related jobs such as buttons, zips, and thread sellers through their trading activities. At the same time, they distribute goods within Mozambique, and further to countries such as South Africa, Zimbabwe, Malawi, and Tanzania.

The irony is that while policymakers are tightening rules and persecuting sellers, these resilient women traders continue to find a way of curbing or counteracting the existing immigration and spatial rules as they said: “We have to feed our families”. The hope is that Africa, will align to maximising the potential of these traders.

Inês M. Raimundo is a Human Geographer with an interest in migration and inclusive growth, food security, climate change and forced migration in Mozambique. She is Associate Professor and Head of Department of Academic Assurance, at the Faculty of Arts and Social Sciences, Eduardo Mondlane University, Mozambique. She has served as executive member of the International Council for Science-Regional Committee for Africa. In 2019 she received appreciation from Global Challenge Research Fund and UK Research and Innovation for her contribution to UKRI International Development Peer Review College. She has published numerous papers on migration and food security. Also, she has supervised several PhD and Masters Students and published fairly in Portuguese and English. 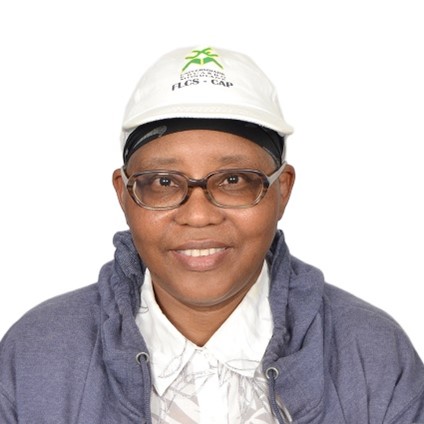