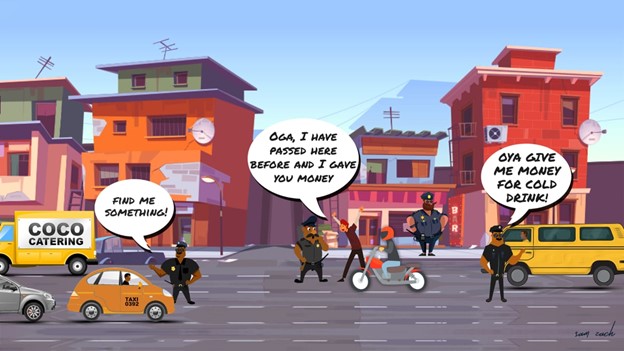 Informal transport or para transit such as traditional taxi, tricycle (keke), mini vans (danfo) and motorcycles (Okada) are the preferred means of transportation for many people in cities of developing countries characterized by the informality of services (Kumar, Zimmerman, & Arroyo-Arroyo, 2021). Politicians, the police, bureaucrats, a large and diverse number of vehicle owners, insurance companies, industry associations, drivers and their unions, touts, route and terminal managers, mechanics, and, of course, users or commuter are some of the key players in the informal public transportation sector (Klopp & Mitullah, 2015). It is characterized by antagonistic relationships between the many stakeholders who vie for personal gain and make life unpleasant for commuters (Kumar, Zimmerman, & Arroyo-Arroyo, 2021). An example of such antagonistic relationship is that which exist between police and informal public transport operators in many African cities.

For example, Nigerians commuting on the country’s roadways, engaging in some sort of commerce, running day-to-day errands, or working within their offices are habitually exposed to extortion by the men of the Nigeria Police Force (Human Right Report, 2010). Similarly, police extortion is endemic in the South African society (Faull, 2007). Arrivealive (2021) summarized studies of crime in South Africa and revealed that the most obvious case of corruption occurs with traffic officials, followed by police. Corroborating this, Saferspaces, (n.d.) states that in South Africa, the police have also been known to put up illegal roadblocks to collect money from motorists. While Nkosi (2021) reported cases of police harassing motorist black motorist who drive through their roadblocks in Durban, South Africa. In Nigeria, men of the Nigeria Police Force are seen most times armed with pistols and/or automatic machine guns, stopping drivers, asking and collecting bribes from passing commercial vehicles they come in contact with (Adebayo & Ojo, 2009). A number of road users particularly drivers of informal public transport who refused to pay the bribe required by police officers at roadblocks and tollgates have met their tragic demise at the hands of these police officers or have been victims of police brutality (Iyang & Abraham, 2013). The continuous disregard to public outcry on police harassment by the political class and the police hierarchy brought about the #ENDSARS protest in the major cities of Nigeria such as Lagos, Abuja and Ibadan in October 2020.